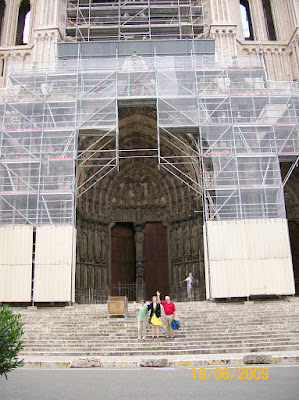 I love Christmas card photos and newsletters. I love the conventions, the traditional poses, and also the people who send or show me the outtake photos! In the last few years I've been fascinated with holiday photos taken in France, so often posed in front of the Eiffel tower. In reaction, I felt compelled to choose a photo of my family in front of the red carpet entrance to the movie awards auditorium in Cannes. Here's one I took in front of Chartres; I wanted a pose with the scaffolding, because we thought it would be good for our claim that we were there for the rebuilding after the demolition of the cathedral at Chartres.

I also love reading poems by George Bilgere because he's funny, thoughtful, and once had the good taste to give an award to a poem written by my daughter. Here's one of his poems that had me laughing out loud, Great Cathedrals:

Before a date, my college roommate
Used to drive his candy-apple red Camaro
Down to the car wash and spend the afternoon
Washing, waxing, vacuuming it,
Detailing the chrome strips, buffing the fenders,
Spraying the big expensive tires
With their raised white lettering

That said something like Intruder
or Marauder, with a silicone spray
Until they were slick and dark as sex.
He polished that car as if each caress,
Each pass of the chamois, each loving
Stroke of the terry cloth would increase,

By measurable degrees,
The likelihood that in the immaculate
Front seat, with its film of freshly applied
Vinyl cleaner, at the end of a cul-de-sac
Somewhere above the campus,
She would consent to be rubbed
And buffed just as lovingly.

We do what we can,
And if God is no more impressed
By the cathedral at Chartres
Than by a righteously clean and cherry
Camaro, at least He can't say
We haven't tried
With all our might to conceal our fear
That we have little else to offer
Than stained glass or polished chrome,
The elbow grease of our good intentions.

So I'm happy to see
That in the Christmas card photo he sent
Mark stands, balding now,
With a dignified gut, a pretty wife,
And a couple of nice-looking kids, in front
Of the great cathedral
Like the sweet vision of a future
He'd been vouchsafed one day
Long ago, through Turtle Wax
On a gleaming hubcap.

Here's to all of you, that your families may appreciate at least the elbow grease of your good intentions this holiday season!
Posted by Jeanne at 9:06 AM

I really like that poem, especially the one but last stanza.

Travel safely today--I'm a little jealous you are flying into KC. Wave at the city for me.

a very happy Christmas to you!