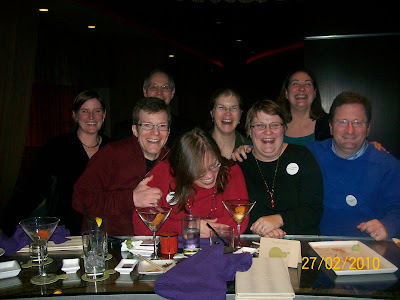 
As Denise Levertov says in her poem--talking back to Wordworth--the world was not with us enough, so my small-town family set out on an expedition to the big city over our holiday break. We went to Chicago. Our group consisted of my family, my brother's family, and my parents--ten people, the youngest 10 and the oldest 81.

Our first scheduled delight was lunch and champagne under the enormously instrument-laden Christmas tree at the Walnut Room in Macy's, where a fairy princess came by and waved her wand over the head of each kid (including my 17-year-old), saying that she could grant their "New Year's wishes."

Next we met the League of Imaginary Friends in a sushi bar right in the hotel where we stayed, the Fairmont. It was an extraordinary delight to meet each of them in person, but somehow also a bit anti-climactic. I feel like I know these people; I talk to them almost every day; seeing them in the flesh really doesn't add that much. But it is much more fun to have real drinks together than virtual ones. We had to leave after a couple of hours and as we went up in the elevator, Eleanor turned to me and said "You know, I could see them too."

That evening we went to see White Christmas, which is delightfully schmaltzy and features a song my father sang almost every sunny day throughout my entire childhood, Blue Skies.

The next day we went to see the modern wing of the Art Institute, which hadn't been open the last time we were in Chicago. We sometimes display a moderately irreverent attitude towards modern art and I personally laughed so loud at a comment Eleanor made about a Dali painting that a woman in the gallery hissed "shhh!" at me, which made us scurry off with our noses in the air whispering a line from the movie Love Actually: "it's not funny, actually, it's art."

We went to tea at the Drake, in honor of my parents' 53rd wedding anniversary. It was elegant and fun, as having afternoon tea at a nice hotel always is, and one of the best moments was when the tea was drawing to a close and my ten-year-old niece came up to her sister saying "I brought you something from the bathroom" (it turned out to be a paper towel with a dragon on it).

That evening we went to see Wicked, which was fine spectacle. As my theater-director father said, it's all done with lighting. All of us had seen it before and had been eager to repeat the experience--Eleanor observed that she liked it better this time because she hadn't read the book so recently, and we all agreed.

The next morning we went to see the Chicago History Museum, partly because it had been particularly recommended to us by Lass and partly because we'd all read The Devil in the White City and wanted to see some of the 1893 World's Fair exhibits. We lingered over the White City diorama for a while, placing where the Wooded Isle must have been and where the Ferris Wheel, and then we went back to the hotel and looked out the window at the Field Museum, and after that we took taxis down to the Museum of Science and Industry and walked around inside the dome looking up at the lighted Christmas Tree and thinking a little about the building's 1893 origin.

The ten of us had a farewell dinner at Morton's of Chicago in a private dining room, which was really fun although the food was absurdly expensive. We were living the high life. This is kind of how I felt about the whole holiday:

The world is
not with us enough.
O taste and see

the subway Bible poster said,
meaning The Lord, meaning
if anything all that lives
to the imagination's tongue,

into our flesh our
deaths, crossing the street, plum, quince,
living in the orchard and being

hungry and plucking
the fruit.

After all these delights, we had to pack our things and return home, where we will live the small-town life for a long while.

My mother says we eat black-eyed peas for good luck on New Year's as a relief from the rich holiday food and to remind us of our southern roots. I've met Americans with Scandinavian roots who eat herring, and Americans with German roots who eat sauerkraut for the same reason. What do you eat for good luck in the New Year?
Posted by Jeanne at 3:48 PM

I am sorry to have missed the festivities and I love Eleanor's comment to you!

We don't have any good luck things for New Years, but my mom always let us stay up and gave us a handful of M&Ms when the clock changed over. :)

That sounds like such a fun day! I loved Wicked too and agree that it's better when you have a bit of distance from the darker book.

We will have black-eyed peas tomorrow, partly for good luck but mostly because dang, I like black-eyed peas. (And if there's some pear relish or pepper sauce for them, that's even better.)
Your Chicago trip has me green with envy (but also feeling a bit prissy, as you took to heart my suggestion for tea).
Wishing you and yours peace, health, and happiness in 2011. (And some time with your non-imaginary friends!)

We're having beignets today. Not a tradition yet, but if we do it next year, it might become one. Right now it's more because we both love New Orleans and the delicious food. :-)

The last few years my husband and I cooked all kinds of finger foods like we were having a cocktail party, but it was just us and the kids. We'd crack open a bottle of champagne and go to bed early. This year we were in DC but we were flying home today so we had dinner at the hotel bar. . . and went to bed early. Exciting! If I wasn't so tired I'd have made Hoppin' John which is mostly blacked-eyed peas. If I have the energy I might make it tomorrow.

Lass, we're sorry you missed it, too. I was told that you usually have to be invited three times before you show up, so I'm inventing a middle time before the next big effort.

Amanda, M&Ms for good luck could really catch on!

Avid Reader, yeah, I have to admit I love the musical's happy ending.

PAJ, we had black-eyed peas, ham, and cornbread for supper on New Year's Day. We did need some plain food after wonders like tea at the Drake. Their best sandwich was a tomato and cream cheese. Their scones were okay, but their sweets were some of the fanciest I've ever seen in my fairly extensive experience of hotel teas.

Betty, beignets could be a great tradition! You sound a bit like my cousin, who always said--if we did anything she liked--that now it was a tradition and we'd have to do it always.

Karenlibrarian, we usually make finger foods for New Year's Day lunch so we can make plates and eat in front of whatever movie series we're watching. This year it was the first four Harry Potter movies (next year we think it should be the last four!)

Sounds like so much fun! My family is full of sleepy-at-night morning people, so we never stay up for New Year's. We get all our eating done at Christmas. :p

Jenny, liking to sleep (and having younger kids) is why we started our New Year's Day tradition, rather than making a big deal of New Year's Eve. This year my 17-year-old went to a sleepover party, so Ron and I stayed up until midnight playing LOTR Risk with Walker. We let it go at a pretty even three-way tie at 11:50--Ron had Eriador and Rohan, I had Arnor, and Walker had Rhovanion, Mirkwood, and Rhum. Arnor was heavily defended, while Rhovanion, Mirkwood, and Rhum were spread very thin.

I thought I commented on this already, but apparently I didn't. I'm so glad you made it to the Chicago History Museum. It's one of my favorites. One of the reasons I picked my diss topic is so I can do a lot of research there.

Harriet, Eleanor and I had a shivery pleasure in boarding the train car at the History Museum, because a docent told us that H.H. Holmes had "probably" ridden on it.

The theory is, black-eyed peas, stuffed cabbage, and ham - and they are all supposed to mean something, like luck and money and prosperous times. But I forget which is which, and anyway, I am always too tired by New Years to cook ANYTHING. Well, maybe a soft-boiled egg.

Mumsy, well you have to have a bit of ham to cook with the black-eyed peas, don't you? I soak them the night before and then turn on the burner the next morning and simmer them all day.

I'm so suggestible I had to make myself a soft-boiled egg for lunch.

It was terrific to meet you and your family, and to see the others (most of them after far too long). Lass and I have already missed each other twice, so next time counts as third for me.