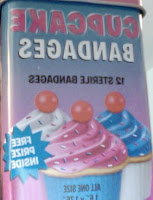 This week I have a prize for anyone who gets one of these book trivia questions right--a cupcake bandage, which promises to give you "the mouth-watering healing power of cupcakes!" So--if I don't already have it--I need your email in order to ask for your mailing address.

Children's: What kind of bear is asked what he hears in the title of the sequel to Brown Bear, Brown Bear, What Do You See?

Classics: What Steinbeck novella about two drifters had the working title "Something That Happened"?

Non-Fiction: What 1970 Abbie Hoffman tome contended that it was immoral not to "steal from the institutions that are pillars of the Pig Empire"?

Book Club: What book did Umberto Eco say he penned because he "felt like poisoning a monk"?

Authors: What author of You Can't Keep A Good Woman Down noted "Writing saved me from the sin and inconvenience of violence"?

Book Bag: What writer's Regan Reilly mysteries include Decked, Snagged, Iced, Fleeced and Twanged?
Posted by Jeanne at 8:26 AM

My wild ass guess on the Umberto Eco is Name of the Rose. Otherwise I got nothing.

Children's: Polar Bear
Classics: Of Mice and Men
Non-Fiction: Steal This Book!
Book Club: The Name of the Rose
Authors: Alice Walker
Book Bag: No idea. The more of these quizzes I take, the more I realize that mysteries are a big hole in my reading experience.

Classics: Of Mice and Men

Book Club: The Name of the Rose (I love that he said that)

Children's: Could be polar bear or panda bear (there are both - I just cannot recall which one came first)

Classics: Of Mice and Men

Book Club: The Name of the Rose

Book Bag: not a clue

I have to say, I knew more this week than I think I ever have before. Funny how they come in spurts like that.

Hm, I have no idea on the Brown Bear question, though I have lovely memories of that book... I'd guess the Steinbeck question was Of Mice and Men, and the Eco question is The Name of the Rose (it's the only book I've ever heard of by him).

Everyone who played got at least one right, so your cupcake bandage is on the way. I've used them all up trying to send multiple bandages to households with children, because I know it's hard to give one child "the healing power of cupcakes" while denying it to another!