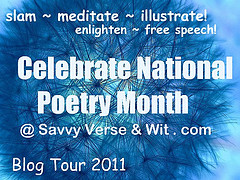 Fred Chappell's volume entitled Shadow Box contains poems reminiscent of the cleverness of John Donne's Songs and Sonnets because of the way he both incorporates and reinvents form.  Each part of the volume (there are five) has a prefatory note explaining what kinds of experiments with form the reader will find therein.

Part One contains "poems-within-poems (enclosed, inlaid, embedded, double, nested)" including "curtal sonnets in which sestets are embedded in octaves."  This is the best part of the volume, and the longest section.  My favorites from it are "Neverland," "A Face in the Crowd," and "Narcissus and Echo," in addition to this one, a curtal sonnet:

Stopping by the Old Homestead

The Interstate is audible from here.
Five miles east, its low, autonomous hum
disturbs the stillness that then stood, the calm
you found when you came here last time, eight years
ago, climbing the same hard road you toiled
in youth that slants a steeper grade today,
this path by the twisted apple tree whose shadow
tensely holds a darker tone. You breathe
harder than when you stopped to see this farm
back then, where claims your life had made against
the future and never paid to own decayed.
Old times shriveled and largely gone, you think,
and trudge all down the hill to find your Chevy
rust-eaten, blind, jacked up on cinder blocks.

You see how the octave (the first eight lines) has a sestet (six lines) within it, consisting of the italicized words?  And then the last six lines, the traditional sestet, has a quatrain consisting of italicized words within it, like half an octave.  And isn't it lovely how the back and forth within the logical progression of the sonnet moves us in time as the speaker pictures "you" moving down the hill?

Part Two contains poems which "center upon visual images," of which I think the one entitled "Fireflies" is the loveliest.  The poet gets a little too cute alluding to Stevens' "Anecdote of the Jar" with "Anecdote of the Ironweed," at least for my taste.

Part Three contains "reliquary" poems.  This one, I think, is the most finely-turned, the best-sculpted:

Her hands were gentle about the ills of children,
Her speech was measured amid the quarrels of kinfolk.
She held the sorrow that had grown unspoken
Till it was perfect as a sphere, a token
Of her secret, with a light that shone within
And stood, in an undropped tear, a sign
Of what enwrapped itself upon the wound
Again, layer on nacreous layer, around
The hurt till it transformed to stone, mild jewel
Priceless, modest, calm, and pure and cool.

Here lies the lucent Pearl on black sateen
That shall not often enrobe her like again.

Don't you like the eulogy of the woman in her coffin, and the image of the pearl within?

Part Four is "counterpoint," and this is the section in which you'll find the title poem, a debate between body and soul with a tribute to Hopkins' poem "Spring and Fall" embedded in it ("Poor Ghost, you are no more than guess").  Flesh and spirit take turns surrounding meaning, culminating with a memorable resonance for the words "sheltering" and "grave."

Part Five is a section "in which ancient Christian Latin hymns provide context and subject matter."  This is my least favorite section, and it is the shortest.  One poem, elaborating on "noctium phantasmata," can't resist the reference to A Midsummer Night's Dream:

"A strumpet image appears in guise
Of Love once lost to compromise;
A taloned Fury in sharp silhouette
Advances, by moonlight ill met."

These four lines are particularly disappointing after my interest has been roused by the wording in previous lines, where "spectral accusers demand/ empathies he cannot profess."

Overall, although there are some moments in the volume that strike me as clunky--mostly to do with literary allusion--there are many lovely moments in these finely-crafted and clever little poems.  This is a book I will pick up and occasionally reread with pleasure, finding another turn of phrase to admire, another hidden shadow within these nested boxes.
Posted by Jeanne at 5:04 AM

What an interesting way to approach poems, placing other poems within the main poem. Cool. Thanks for contributing to the National Poetry Month Blog Tour.

Oh, wonderful, another reader of Chappell. There should be more.

Wow, that's an ambitious form. Kind of makes me want to try one.

Amateur Reader, thanks for being one of the bloggers who introduced me to Chappell!

Harriet, it is ambitious. I get the impression that you could write it, and then tinker with it for years.

I cannot imagine writing these types of poems; it would take years to perfect them! More power to Chappell